There were many activists during this time as people as a whole wanted to be heard. Robert Mapplethorpe was a photographer during this time who was known for photographing bodies in a naked or sexual manner. The body was not only being used in art to convey the meaning of the aids crisis but to question sexuality, purity, along with stereotypes. 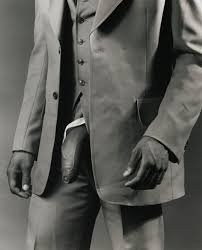 showed a black male in a suit with his penis out of the suit. The photograph also did not include his face. This conveyed not the stigma that surrounds the black male genitals but also how society can sexualize a man in art just as much as a woman. This was a turning point as throughout history women were modeled nude and it was a common theme, but what about the man? Now we are able to sexualize the man the same way we sexualized the woman.

A question still remains, is this fine art or pornographic photographs? It is stated that

What most irritates Boyce is not so much that Mapplethorpe pictured sadomasochistic imagery, but instead that the artist so successfully blurred the line between so-called legitimate art and pornography. He mischievously danced across the naughty/nice divide in a manner that makes it difficult to know where artistic transgression ends and social capitulation begins.1

Nudity was always portrayed in early history paintings and sculpture, where is the line between fine art and pornography? Is David by Michelangelo fine art because of its age? When looking at Mapplethorpe compared to David, I see Mapplethorpe challenging previous conceptions about sexuality, purity, and stereotypes. Maybe the pictures are obscene, and maybe they do make people uncomfortable, but that is the great thing about art; having the ability to express these obscene ideas and images to make individuals think without having to say a word about it.